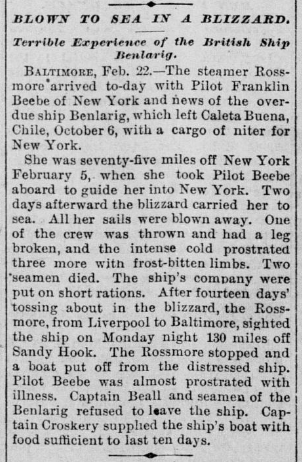 Blown to Sea in a Blizzard.

Baltimore, Feb. 22.—The steamer Rossmore arrived to-day with Pilot Franklin Beebe of New York and news of the overdue ship Benlarig, which left Caleta Buena, Chile, October 6, with a cargo of niter for New York.

She was seventy-five miles off New York February 5, when she took Pilot Beebe aboard to guide her into New York. Two days afterward the blizzard carried her to sea. All her sails were blown away. One of the crew was thrown and had a leg broken, and the intense cold prostrated three more with frost-bitten limbs. Two seamen died. The ship's company were put on short rations. After fourteen days' tossing about in the blizzard, the Rossmore, from Liverpool to Baltimore, sighted the ship on Monday night 130 miles off Sandy Hook. The Rossmore stopped and a boat put off from the distressed ship. Pilot Beebe was almost prostrated with illness. Captain Beall and seamen of the Benlarig refused to leave the ship. Captain Croskery supplied the ship's boat with food sufficient to last ten days.