Joan Nyria Hancox (always known as Nyria) was born on 23 February 1918 in Bebington, Cheshire[1] and was the only daughter of Richard James Hancox and Marian Gilmour Hancox (née Croskery).[1] She was christened on 7 April 1918.[2] She had one older brother, Eric Geoffrey West Hancox. They lived at 8 Thorburn Road, Rock Ferry, Birkenhead, Cheshire.

From the age of 6, she attended Howell's School, Denbigh as a boarder (in Wales).[3]

During the war she met Ralph Munday Denton-Barker and after divorcing her first husband, they married on 28 June, 1947.[4] They were living at 2 Rookfield Close, Muswell Hill, London N10. 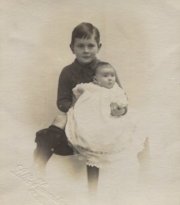 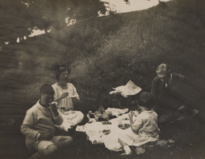