Please see the following Wikipedia article for more coverage of this topic:
Geffrard

If you have material to contribute, please consider adding it to Wikipedia rather than here, so more people can benefit.

He was Master of the brig Wolverine[2],S6) which sailed from Melbourne to Guam in 1869: later sailings include one from Batavia, arriving March 4 1871, and from Humboldt, California, 1872. He was the Master of the Geffrard,(316 tons) reg. Melbourne, which sailed from Hong Kong to Sydney, NSW, 22 September 1873 with 11 crew and 20 Passengers (all Chinese). In 1875 he is listed as sailing on the Geffrard from Fremantle to Vasse (cargo 24 boxes tea, 52 bags sugar, 43 bags bran and 19 pkgs. sundries)(S2). Then the wreck of the Geffrard is recorded on 12 June 1875 off Quindalup, Western Australia, while on a voyage from Melbourne to Shanghai with a cargo of timber. The cause of the shipwreck was "chain parted and breached" so that she was wrecked and sunk.(S1)

His father-in-law shipped a box of his belongings back to England in May 1876 (contents worth over £31).[3]

Buried in the family grave of Henry and Fanny Cook (parents-in-law). BELL FROM OLD SHIP. (1949, July 8). The West Australian, p. 21. Retrieved August 17, 2012, from http://nla.gov.au/nla.news-article47735538 BUSSELTON, July 7: A letter received this week by the headmaster of the Busselton State School (Mr. S. G. Demasson) from Mr. H. G, Yelverton, of Quindalup, clears up the mystery as to how a bell from the Norwegian ship Geffrard came to be at the school.

Mr. Yelverton said that the Geffrard was driven ashore about 1875 or 1876 while loading tim ber for Mauritius and became a total wreck. His grandfather, the late Mr. Henry Yelverton, bought all the fittings off the wreck, including the bell, which was placed outside his house office at the Quindalup beach, where it remained for a number of years and was rung to call the men to work and knock off. It was given by Mr. H. G. Yelverton's father, the late Mr. H. J. Yelverton, to the late Mr. G. B. Milne for erection at the Busselton school.

While fishing over a bank about a quarter of a mile north-east of the old Quindalup jetty on a calm day between 1888 and 1900 Mr. W. J. Harwood could still see the remains of the wreck.

This bank is still known to older residents of Quindalup as the Geffrard Bank. Other ships on which he was Master were the Percy, Penelope, South Picton and the Flying Venus (Lloyds Registers 1858, Guildhall Library, London) 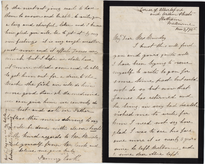