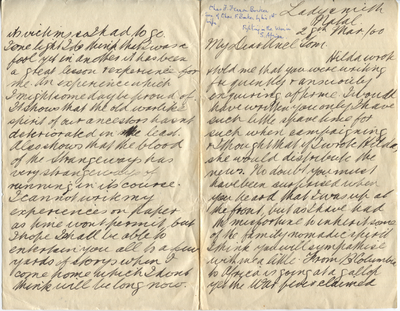 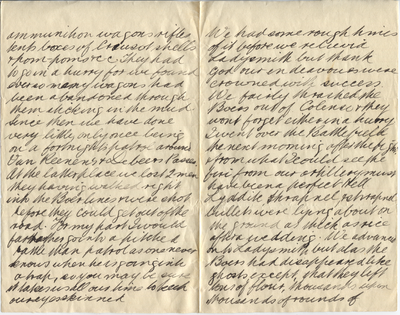 Fighting in the war in S. Africa.

Hilda wrote & told me that you were writing frequently and anxiously inquiring after me. I would have written you only I have such little spare time for such when campaigning and I thought that if I wrote to Hilda she would distribute the news. No doubt you must have been surprised when you heard I was up at the front, but as I have had the misfortune to inherit some of the family nomadic spirit I think you will sympathise with me a little. From B. Columbia to Africa is going at a gallop yet the war fever claimed its victims so I had to go. Some might I do think that I was a fool yet in another it has been a great lesson and experience for me. An experience which I might some day be proud of. It shows that the old warlike spirit of our ancestors hasn't deteriorated in the least. Also shows that the blood of the Strangeways has very strangeways of running in its course. I cannot write my experiences on paper as time won't permit, but I hope I shall be able to entertain you all of a few yards of storys when I come home which I don't think will be long now.

We had some rough times of it before we relieved Ladysmith but thank God our endeavours were crowned with success. We fairly thrashed the Boers out of Colenso & they won't forget either in a hurry. I went over the battlefield the next morning after the fighting and from what I could see the fire from our artillary must have been a perfect Hell. Lyddite, shrapnel, & shrapnel bullets were lying about on the ground as thick as rice after a wedding. We advanced on to Ladysmith but alas the Boers had disappeared like ghosts except they left tons of flour, thousands upon thousands of rounds of ammunition, wagon, rifles, tents, boxes of Creusot shells and pom-poms & c-c. They had to go in a hurry for we found ever so many wagons had been abandoned through them sticking in the mud. Since then we have done very little, only once being on a fortnight's patrol around Van Reenen's & De Beers Passes. At the latter place we lost 2 men they having walked right into the Boer lines and and were shot before they could get out of the road. For my part I would far rather go into a pitched battle than patrol as one never knows when he is going into a trap, so you may be sure it takes us all our time to keep our eyes skinned.

Have you heard anything from Mr Scott yet, he said when he comes over to England he would call and see you which I hope he will do. When the war is over I am coming home for a short while recruit up a littl & then I shall back to B.C. to settle down I hope, as I think now I have had my fling.

Are you keeping in good health? I hope so, how is Aunt Mary & all my noble cousins I am looking forward to seeing you all once more. Will you kindly remember me to Mr. and Miss Tyson trusting they are well.

It is stables[TODO] now so I must close with best love.

To yourself Aunt Mary & all my cousins

Believe me to be
Your affect. nephew
Charles F. F. Barker.

If you write address thus.—

I wish I could get a pull at Kruger's whiskers.