Letter from W.S. Hall to his sister Sarah Bracher, 1864 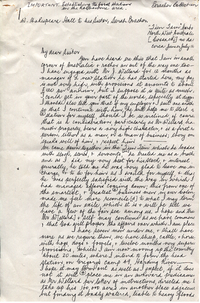 
North West Australia
[Cossack] no date
circa June or July 1864

You have heard ere this that I am in another corner of Australia & rather an out of the way one too—I have engaged with Mr J. Wellard for 12 months as manager of a new station he has started here, my pay is not very high, with provisions it amounts to about £120 per annum, but I suppose it is quite as much as I could get in your part of the world, especially at diggings. I should also tell you that if my employer & I suit one another so that I continue with him, he will help me to start a ② station for myself, should I be so inclined of course that is a consideration, particularly as Mr Wellard has much property, bears a very high character, & is a first [illegible]  person, either as a man, or a man of business; every one speaks well of him, & respect him.——

We came down together in the "Tien Tsin" which he loaded with stock, stores, & servents[sic], he treated me as a brother and as I did my very best for his stock, & interest generally, he told me he was very glad to leave me in charge, & to do for him as I would for myself, & that he was perfectly satisfied with the way in which I had managed affairs coming down; this from one of the smartest & greatest ③ business men in our colony made me feel more reconcile[d] to what I may term the life of an exile, which it is & will be till we have a few of the fair sex among us. I hope and trust Mr W[ellard] & self may continue as we have commenced & that God will prosper the affairs over which I am placed.

I have seven men under me, & shall have more as we require them, we have sheep, cattle, & horse with hogs, dogs & fowels, & twelve months very superior provisions, which I am now moving up the country about 20 miles, where I intend to farm the head station on Gregory's camp 49, Harding River——

I hope it may turn out as well as I expect, if it does not it will ④ place me in an awkward predicament as Mr Wellard per letter of instructions, directed me to take up his 100,000 acres in another place adjacent but finding it badly watered, liable to heavy floods 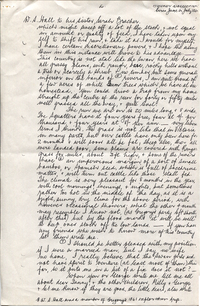 which might sweep off a lot of the stock, & not equal in amount or quality of feed, I have taken up myself to shift his run, & take it as I would for myself; I have certain discretionary powers, & I hope the using them in this instance will prove to his advantage.—— This country is not atal like the Swan, here we have all grassy plains, with rough, base, rocky hills without a tree or scarcely a shrub, & no timber but some generally inferior on the banks of ⑤ rivers, I am quite prod of a few acres of white gum trees which we have at our homestead. You could drive a trap from my home straight up the centre of the run for forty or fifty miles well grassed all the way, & quite level.

The run we are on is 20 miles long, & 8 wide. The squatters have it four years free, four at 4/- per thousand, & four years at 8/- per ann. — very liberal terms I think. The grass is not like that in Victoria in many parts, but our cattle have only been here for 2 months & will soon all be fat, sheep also, tho. all were landed poor, some plains are covered with Ranger grass for miles about 3ft high, & some of the rivers have ⑥ an impervious margin of a sort of small bamboo, or Spanish seed, which is full of sacchrine matter, & will turn out cattle like those stall fed. The climate is very pleasant for 8 months in the year, with cool mornings, evenings, & nights, but sometimes rather too hot in the middle of the day, as it is a bright, sunny, dry clime for the above period, with however occasional showers; what the other 4 months may resemble I know not, (as Gregory's party left shortly after this[2]) but by the flood marks it will be well to keep ones stock off the low lands.——If you have any friends who wish to know more of this country let them write me.

⑦ I should be better pleased with my position if I were a married man, but I say no wife no home, I really believe that the Swan girls wd. not have spirit to venture (at least most of them) this far, so it puts me in a bit of a fix does it not?——

When you or George write me tell me all about dear Fanny, & the other children, Milly & George, & let me know if they are good, the little dears, also write 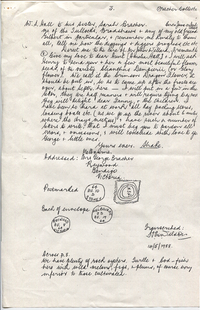 3. Bracher Collection W.S. Hall to his sister, Sarah Bracher. Circa June or July 1864.

me of the Tullocks, Bradshaws & any of my old friends. Gilbert in particular, & remember me kindly to them all, tell me how the diggings & diggers progress, etc etc.

Direct me to the care of Mr John Wellard, Fremantle ⑧ Give my love to dear Aunt [Amelia Hall] & I will ask Henry to send your & her a few most beautiful flower seeds of the variety Clianthus Dampierii, (or Glory flowers). We call it the Crimson Dragon Flower, it should be put in, so as to come up after the frosts are over, about Septr. here — I will put in a few in the letter, they are half runners & will require tying to a rod they will delight dear Fanny, & the children. I have been so hard at work all day packing stores, loading boats etc. (as we go up the river about 6 miles where the drays meet us) & have such a number of letters to write, that I must beg you to pardon all errors, & omissions, & will conclude with love to you, George & little ones.

We have plenty of rock oysters, turtle & cod-fish here with wild melons, figs, & plums, of course very inferior to those cultivated.