Edward Frank Hall (known as 'Frank') was farmer in the Swan River Colony, most well-known as the first white settler of the Manjimup district,[1] and for his cattle-stealing (which earned him the 'bushranger' epithet, although this was perhaps undeserved).[2]

He was one of the first white children born in the nacent colony in 1833, and grew up surrounded by indigenous people and could speak their language fluently.[3] He was the youngest of the eight children of Sarah and Henry Hall, and grew up at Halls Cottage in Mandurah. 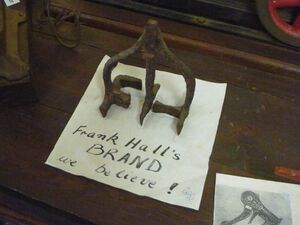 His cattle brand, at Northampton Musuem. (Other view)

He established a cattle station at the present location of the town of Manjimup in the South West of Western Australia.[1] He sold this to John Giblett and joined H.M. Lefroy's expedition to Coolgardi in 1863.[1]

He was captured in 1860, and escaped shortly afterwards.[2]

Frank Hall, — To mark out a road &c., from Manjenup towards Busselton for £60.

Advices from the Vasse, dated 24th ult., inform us of the escape of F. Hall, one of the parties said to be concerned in the stealing of cattle. Up to that date no evidence whatever had been produced against James Guerin, accused of receiving and killing some of the stolen cattle. They were arrested by the police on Tuesday, 16th ult., but bailed out that evening. The next day they appeared before the Magistrates and were remanded until the following Friday, the 21st, and locked up, bail being refused on any terms. On the 21st ult. they were again remanded until last Friday, when it was expected that the Superintendent of Police and Sir Eliot, Resident Magistrate of Bunbury, would be present on the Bench. On Sunday morning, the 23rd instant, Frank Hall went out of the jail in company with a policeman. When the policeman's back was turned Hall bolted across the street, a horse happened to be tied to a fence, had, before the policeman could catch him, he jumped on the horsa, called out "good bye," and galloped off as hard as he could. Three mounted policemen were after him in half-an-hour in the direction of Wonnerup. One of the policemen received orders to proceed direct to the Sound. It is thought that Hall will not be able to escape out of the colony, but will probably give the police some trouble before he is captured. Since the above was written we have heard from a gentleman recently returned from the district that, up to Thursday last, Hall had not been taken. The hearing of the case was postponed from Friday until this day.

We have intelligence from the Southern Districts up to Monday last. The search after Frank Hall had until then been unsuccessful. Mr Guerin still continued under remand, and we believe no evidence had been adduced to show a guilty knowledge on his part. There are strange reports as to the doings of the Commissioner of Police, which we can scarcely believe to be true, but if so, they will doubtless form the subject of future proceedings in the Civil Court.

Since writing the above we hear Plaints in an action at Civil Law, have been entered against Sir Alexander Campbell at the suit of Mr Robert Hester, for false imprisonment. It is said the Police Commissioner arrested Mr Hester in the house of Mr Brydges, for Frank Hall, notwithstanding Mr Brydges assured him to the contrary, and that not content with a simple arrest, the Commissioner put a chain round Mr Hester's neck and placed a policeman over him with a loaded pistol.

The following information has been received from the Southward, relative to the proceedings of the Commissioner of Police: — That gentleman called at the house of Dr. Brydges, situate at the Capel, about 12 miles from Bunbury, and there met Mr Robert Hester, who was lying on the sofa. Dr. Brydges introduced Mr Hester by name, and with Mrs Brydges left the room to order some refreshments for Sir Alexander Campbell. During their absence, Sir Alexander appeared to entertain a suspicion that Mr Hester was Frank Hall, went out and asked his orderly who the person was, that person replied, "Frank Hall." Sir Alexander then told his man to get a chain from his horse's neck and put it round the neck of Mr Hester. This was done in spite of the protestations of Dr. Brydges, that it was not Hall. The policeman held one end of the chain, the other being round Mr Hester's neck. Mr Hester was kept in this degrading position for several minutes, and he was only released from confinement upon Dr. Brydges making oath that his name was Hester and not Hall. During the time Mr Hester was in custody the Superintendent of Police went into the bedroom of his host and turned down the bedclothes, for what purpose it is difficult to conjecture, seeing that he had a chain round the neck of the presumed Frank Hall. We have heard of other proceedings on the part of this official, but as the whole matter will in all probability come before, and be decided by a competent tribunal, we shall not advert to them. As regards Mr Hester's case, he at once took legal advice, and his Solicitor has given Sir Alexander Campbell notice of action. We also learn that James Guerin has been committed on the evidence of two natives., Frank Hall had not been taken at the date of our last advices.

At the present time, or at least up to the date of our last advices from the reepective districts, two offenders are at large, one to the eastward, the other at the southward, who continue to elude and defy the police. The first individual, who had been imprisoned for horse-stealing, and was out on his ticket-of leave, has displayed a fair amount of assurance and impudence. He does not conceal himself. He is constantly heard of and seen. First at one locality, a day's march from the police who are in search of him: they rush to the spot, and he is seen in another direction. He comes to a house and states that Frank Hall had died in his arms, and invites the inmates to go with him and see the body: they do so, but he leaves them, returns to the house, and steals a horse. It seems he is well mounted; he ought to be, for he is continually stealing horses, which are turned adrift as soon as they have served his purpose. We believe that the police of three districts are employed racing about the country after this gentleman. In this case the delinquent — his name is Lilly — is an old offender, coming out as a convict, reconvicted in the colony, and now in a fair way of receiving an additional sentence — should he be caught.

The other case is very dissimilar. Lilly is heard of continually, and seen often, Hall has never been heard of or seen since his escape. Notwithstanding the reward which has been offered for his apprehension, the array of police, the number of natives, the little army of spies, all anxious to have a share of the reward, not the slightest trace of him has been found, no clue to his whereabouts, and the police are as much abroad with respect to his movements and place of concealment as they were the first day he started, now more than a month ago. For aught they know to the contrary, he may be out of the colony — perhaps left in the Hobart Town whaler which anchored for a day and a night off Castle Rock. This person has never been convicted, has not even been committed for trial, and may therefore, we presume, be ordinarily deemed less culpable than the veteran offender; but for the apprehension of the latter no reward has, to our knowledge, been offered. How ever, it matters not, reward or no reward, boldness or caution on the part of the runaways, constantly seen or constantly secluded, the result is the same. They both elude and mock the police.

There was a Hobart Town whaler in Geographe Bay; she had put in with the intention of whaling. A policeman and special constable had been placed on board to look out for Frank Hall.

It was generally reported that Frank Hall has left tbe colony; the police, however, are still on tbe alert.

Frank Hall and — Mottram were charged with stealing a bull, the property of Mrs Vernon Bussell. Hall pleaded guilty, and absolved Mottram, as his servant. There was no evidence against Mottram to show a guilty knowledge, but he assisted to drive the animal, and branded it with his master's brand. The jury found him guilty, with a recommendation to mercy. The sentences was deferred as there were other indictments against the prisoners.

In 1860 a reward of the fabulous sum of £100 was offered for the apprehension of Frank Hall, wanted for cattle stealing in the Vasse and Blackwood districts. This was at a time when a married couple could be hired to work on a farm for their keep and £50 a year, or a labourer for £1 a week. A reward of £100 would have been a fortune to most people in the 1860s (it is perhaps equivalent to about $40,000 in 1993). How did all this come about?