Ernest Anderton Frank Hall (1869–1956) was a Western Australian pastoralist. Born at the family's property Wongong in Armadale, Western Australia on 12 June 1889.[1][2] He married Esther Smalpage on 8 December 1909[2] and they had four children. 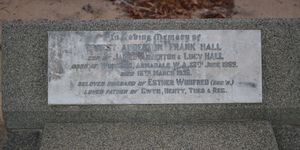 Died on 16 March 1956,[2] his death announced in the Pastoral Review and Graziers' Record as follows:[3]

Following a prolonged illness, Mr. Ernest A. Hall, a well-known pastoralist in Western Australia, died at his home at West Perth on 16th March. He was a grandson of Mr. Edward Hall, who landed in Western Australia in January 1830—a few months after the founding of the State—and made his home at Mandurah, where a prominent landmark, Hall's Head, remains as a memorial.

Mr. Hall's father, James Anderton Hall, was a pioneer of the north, and overlanded stock from Perth in the 1860's. Members of the droving party were attacked by natives, some members being killed, and the stock scattered. The remnants of the flock were collected by a survivor and ultimately reached Roebourne. He finally established his home at what is today known as Hamersley Station, about a hundred miles south of Roebourne. Here Mr. Ernest Hall learned to do all the jobs inseparable from station life on a pioneer holding. Hamersley Station was subsequently sold to Mr. Duncan Macrae, and Ernest Hall engaged in droving stock for metropolitan markets from Roebourne district, including many mobs of cattle.

Later, with a cousin, he purchased Yandyarra Station, and, on disposal of this property, acquired Croydon Station. After a few good seasons he was able to buy Sherlock Station, but Croydon was sold to Mr. James Nicholas and Sherlock to Mr. Edward Meares. Mr. Hall next purchased Wooramel Station, in the Carnarvon district, now under the management of his son, Mr. Theo Hall. The Wooramel clip is highly regarded and always commands prices in the top bracket at sale.

A daughter and three sons survive, his wife having died a few years ago.